Four feet of snow in the front yard.

Three feet of snow in the back.

…..and what to my wondering eyes should appear? (not St. Nick)

I nice, colourful, plump looking Robin, in the one patch of grass where the neighbour’s sump pump is draining.

Our friends at All About Birds tells us……

The quintessential early bird, American Robins are common sights on lawns across North America, where you often see them tugging earthworms out of the ground. Robins are popular birds for their warm orange breast, cheery song, and early appearance at the end of winter. Though they’re familiar town and city birds, American Robins are at home in wilder areas, too, including mountain forests and Alaskan wilderness.

Look for American Robins running across lawns or stalking earthworms in your yard or a nearby park. Since robins sing frequently, you can find them by listening for their clear, lilting musical whistles. In winter they may disappear from your lawn but could still be around. Look for flocks of them in treetops and around fruiting trees, and listen for their low cuck notes.

Well, I know at my place, it’ll be another month or more before we see worms being pulled out of the ground by robins!  Until they can get their own food you might want to consider feeding them.  To attract these birds to your feeder, put out some chopped apples, maybe some berries or mealworms (get these at the pet shops). But remember that robins don’t eat birdseed.  Also putting out some  water might be important for a week or so until we get back to melting snow.

Find out more about Robins at Audubon or All About Birds. 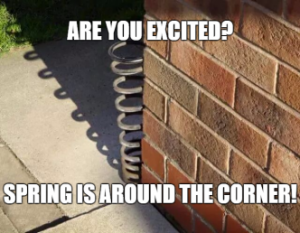 When:   hopefully next season!

When: Hopefully next Spring!